The third and final article of our series on the non-current assets cycle.

This is the final article in our series that’s looking at the cycle of buying, owning and disposing of non-current assets.

In part one we discussed IAS 1 and the practical application of the concept of materiality in different business contexts.  In part two  we analysed a sales invoice for the purchase of a new machine that included a part-exchange.

We also discussed IAS 16 and the difference between capital and revenue expenditure, as well as looking at how to process the transaction in the accounting records and non-current asset register.  Now we need to complete the disposal of the machine that was sold in part-exchange for the new one.

Assuming that machine – KOL346 is the one that was sold, we can see details of its acquisition in January 2015. We can also see the accounting treatment that has been applied to it whist it’s been owned by LMO Ltd, the depreciation.

The register records the annual depreciation charges and carrying values, once the accumulated depreciation has been deducted from the cost.  Sometimes the register also records details of the accounting policies an organisation has in relation to depreciation.  LMO Ltd’s policy is:

Depreciation is for plant and machinery is calculated on a straight line basis for each full calendar month an asset is held.

Let’s assume that KOL346 was expected to have a useful economic life of four years and a residual value of £2,000. This information, in conjunction with the depreciation policy, enables the annual depreciation charge to be calculated.  Using the straight line method we:

If £1,662.50 is set against the original cost, every year for four years, it will be reduced to the residual amount of £2,000. In other words the cost will have been spread over the economic lifetime of the machine.

This is the purpose of depreciation as set out in IAS 16 – Property, Plant and Equipment.  It is also an application of the accruals concept because the cost of KOL346, in the form of the depreciation charges, is matched to the income generated by it, over the four years it is expected to be owned by the business, regardless of the fact it was bought in 2015.

However, if we look again at the non-current asset register, we can see that the full annual charge was not applied in the year ending 30th September 2015.  This is due to the organisation’s policy of applying depreciation on a monthly basis.  As the machine was bought in mid-January, the depreciation charge was calculated for the eight full months it was owned in the year of acquisition.  As the straight line method calculates equal annual instalments, the £1,662.50 charge was calculated as above, but then divided by twelve and multiplied by eight, to calculate the pro-rata figure of £1,108.33.

This proportioning needs to be repeated in the year of disposal so that all the depreciation is accounted for before we finalise the accounts. The date of disposal is shown on the invoice: 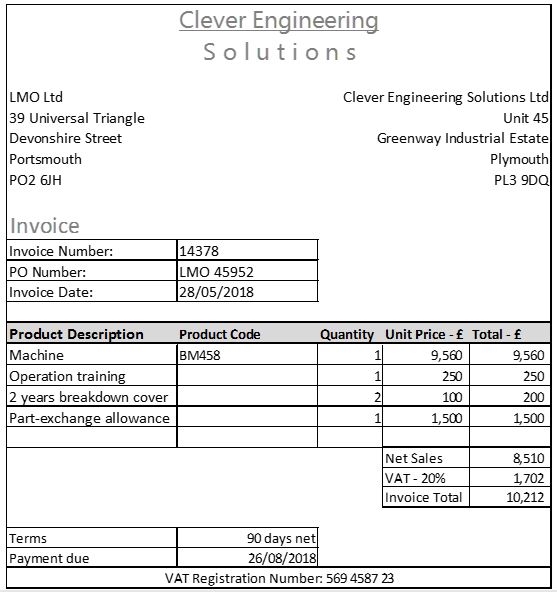 As the disposal date is at the end of May, we need to count the full months that LMO Ltd owned the machine in the year ending 30th September 2018.  This is seven months, from October 2017 to April 2018, so the depreciation charge will be:

The non-current asset register can be updated to show:

Note, that the disposal proceeds are the part-exchange allowance and that the carrying value is nil as the machine has been sold.

The disposal account shows that a  £1,747 loss was made.  However, this isn’t a true loss as it is not a cash transaction but an adjustment to the depreciation now that the cycle is complete.  In this case, LMO Ltd thought it would keep the machine for four years, at which point it was expected to have a residual value of £2,000.  In reality, it was disposed of after three years and three months and had a residual value of £1,500.  This resulted in too little depreciation being charged during LMO’s ownership to spread out the original cost to reduce it to the actual residual value.

A loss on disposal really means that more expense needs to be charged in the statement of profit or loss (SoPL) to balance the cycle once it is complete. Equally when a profit is made, this actually means that the asset had been over depreciated during its ownership and the expenses need reducing.  The accounting adjustment for this is to add additional income, hence the profit in kind.

The non-current asset cycle is complicated and involves lots of accounting theory, concepts and advanced bookkeeping skills. An acquisition with a part-exchange is the most complicated variant of the cycle so having worked through this series you are in a great position to tackle this tricky topic.

* In part two we posted the part-exchange allowance as part of processing the invoice so strictly speaking this entry would have already been in the account.  However, I have amended the order of entries and the account references for ease of understanding.