The fourth article of our series on some of the trickiest areas at Advanced level.

Lewis is a member of Gorgeous Threads & Co’s finance team and has recently been working on both the organisation’s management and financial accounts. Heidi, a new apprentice, is due to join the team.

She has sent an email enquiring about break-even analysis, as she was told at her interview that it’s the management accounting technique used at Gorgeous Threads to inform short-term decision-making.

Lewis is about to start working on the actual figures for the year to compare to the budget so has been asked to reply to Heidi, using his findings to illustrate his explanations.

Heidi has enquired about:

He opens the spreadsheet he’s been working on to prepare the financial accounts, as it contains the actual figures for the year.

In the Working tab Lewis has some management accounting details: 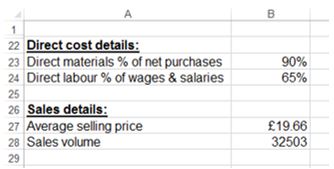 He knows direct costs are incurred directly by production, and vary in proportion to output, in other words an increase in volume leads to an increase in cost.

Therefore he can use them to calculate the variable costs in a new worksheet he’s called Actuals.

As Gorgeous Threads has no direct expenses, he writes a formula that calculates the total variable cost as of the wages and salaries:

Then to calculate the cost per unit he divides the total cost by the quantity:

Contribution towards the bills

Next Lewis calculates how much contribution each item of clothing sold makes towards paying the organisation’s bills.

His knowledge of management accounting theory means, he understands that this is what’s left of the selling price once the variable costs have been deducted, therefore his formula is:

To calculate the total contribution, he does the opposite of what he did with the variable costs, and multiples the cost per unit by the quantity:

Currently the figures tell Lewis that each time Gorgeous Threads makes a sale it generates on average £19.66 of income.

Of that income £14.66 has to pay for direct materials and labour, which leave £5 to pay the organisation’s other costs.

These other costs are the fixed costs. They’re the opposite of variable ones and are the overheads Gorgeous Threads will have to pay regardless of output.

In other words, fixed costs remain the same even if there is an increase in volume.

Lewis thinks about the formula required as the figures he needs are on the ETB, but he must be careful to select the correct ones. The fixed costs will be in the SPL columns as that’s where the income and expenditure for the year is shown.

He needs to include all the remaining expenses, remembering that he has already included 90% of the purchases and 65% of the wages in the variable costs. This means that only 10% of purchases and 35% of Discounts will need to be included but whereas discounts allowed will increase the cost, discounts received will reduce it.

Inventory should not be included as it’s a year-end adjustment, nor should sales or the profit figure.

Lewis knows it will be a long formula, so he starts by adding the net purchases and wages, then deducts the variable costs from their total, to leave the correct proportion:

He then adds all the other expenses, and finally deduced the discounts received:

Lewis is now in a position to calculate the break-even sales volume. He knows that this is how many items of clothing Gorgeous Threads has to sell in order to have enough £5 contributions to cover the fixed costs of £117,744.

To calculate it, he simply has to divide the fixed costs by the contribution per unit, being mindful to round up his answer to a whole unit:

This concludes the calculations Lewis needs to do on the actual break-even, so his next job is to look at the original budgets to see how well the organisation has performed in comparison.

Lewis has found the budgeted figures set at the beginning of the year, and copied them into a worksheet in his spreadsheet: 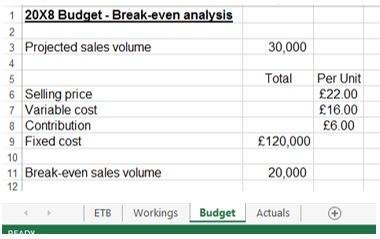 He then writes the following email to Heidi: 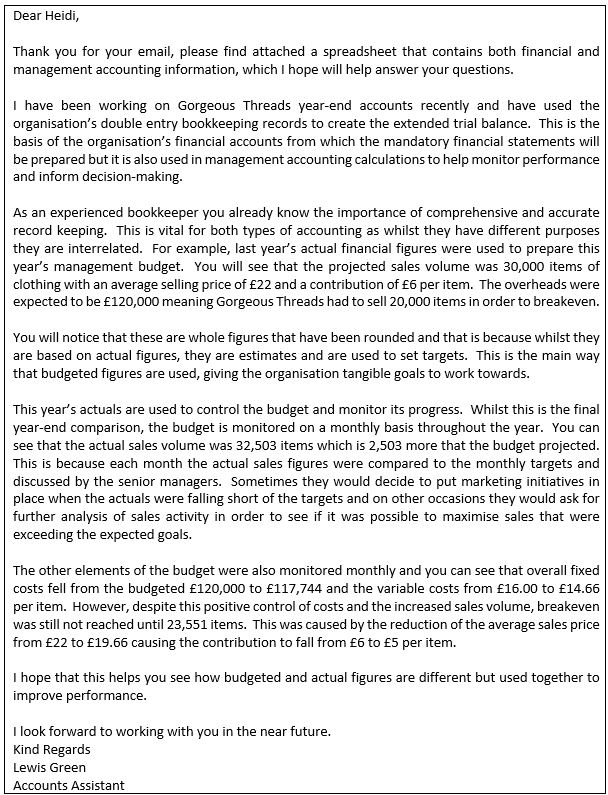 Lewis’ email gives Heidi an explanation of budgeted and actual figures, in relation to both financial and management accounting based on his work on break-even analysis. More detailed articles are available by clicking on the link.

In the next part, Lewis will be helping Heidi settle in, and become accustomed to Gorgeous Threads’ high expectation of spreadsheet users.

Read the next article in the series now: Advanced aspects of spreadsheets