The sixth and final article of our series on some of the trickiest areas at Advanced level.

We’ve worked through a business scenario to illustrate how the AAT Advanced Diploma in Accounting can be applied, in practice, to the typical day-to-day tasks of a part-qualified Accounting Technician.

This final visit to Gorgeous Threads & Co sees Lewis using a spreadsheet to work out how to effectively manage his time, in order to complete a project he has been given by his manager.

Using spreadsheets to manage your time

The project is divided into two parts, and Part One will need to be finalised and signed off before Part Two can be started, as there won’t be an opportunity to go back and amend it.

Part One is made up of three sections which are not related and all have sub-sections.

Part Two is in two sections which again aren’t related, and have a number of sub-sections.

Lewis’s manager has given him a breakdown of how many elements are in each sub-section and the time allocation for each part.

As it’s quite confusing, Lewis has put all the information he has onto a spreadsheet to make it easier to understand. He wants to work how to best manage his time to get the project completed by the deadlines, before he starts actually doing any of the work required.

Lewis starts by using ‘AutoSum’ to find out:

He can easily see that in in Part One the 45 elements are equally distributed between the three sections. As Lewis has 75 hours allocated to Part One he can logically, spend a third of the time on each.

Part Two doesn’t divide as simply but Lewis is comfortable working with proportions as he uses profit ratios for financial accounting and he proportions overheads in management accounting.

He can then absolute the cell references (discussed in Part 3) to G14 and G2 and drag the formula to H15:

Lewis reduces the number of decimal places so that the time allocated is rounded to whole numbers and he cross-checks that the total of cells G15 and H15 are 90, by looking at the value shown for ‘SUM’ on the bottom tool bar, when both cells are highlighted: 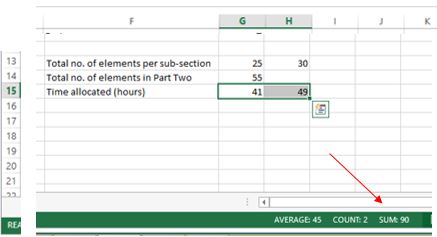 Lewis now has a basic time management plan that allocates 25 hours to each of the three sections in Part One, which he can complete in any order but must all be finished before he starts Part Two.

Then in Part Two, 41 hours are allocated to Section 1 and the remaining 49 hours to Section 2.

Lewis is pleased with his plan but is also a little uneasy about Part Two and Section 3 of Part One, because the number of elements in the sub-sections are not evenly distributed.

He therefore decides to break his time management plan down further.

He repeats the proportioning formula he wrote to allocate the hours for Part Two but this time divides the number of elements in the sub-section by the total number in the sub-section and multiplies by the time allocated to the section: 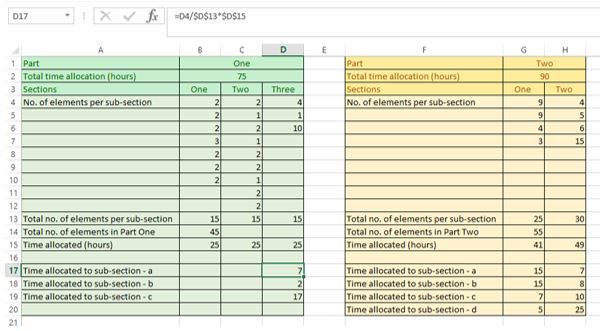 Now Lewis can see that when he’s working on Section 3 of Part One, he should spend seven hours on the first section and only two on the second, in order to give himself enough time to complete the last sub-section, which contains the most elements.

Likewise in Part Two, the final element contains the most sub-sections of the whole project.

Therefore, he’ll need to be very mindful of his time keeping to ensure that he still has 25 hours left at the end of the project to fully complete this last bit.

Lewis is aware that what he’s produced today is a theoretical plan which he can monitor his progress against, to keep himself on track – just like the budgets Gorgeous Threads’ monitor on a monthly basis.

The time management plan has shown Lewis that he’ll not be able to spend more time on an element than has been allocated, without risking running out of time.

Therefore, he’s now off to check what’s involved in each section of the project to ensure that he’s well prepared and will be able to complete it successfully.