The third article of our series on some of the trickiest areas at Advanced level.

In part two Lewis began producing Gorgeous Threads & Co’s final accounts.  He corrected the extended trial balance (ETB), which had been started by a colleague, and calculated the profit for the year figure. Now he needs to produce an appropriation account to show how that net profit is shared between the organisation’s two partners, in accordance with their partnership agreement.

As with Lewis’s previous tasks, he knows that in order to accurately prepare an appropriation account, he’ll have to think through the manual accounting theory, and use his knowledge to help him decide which spreadsheet functions, formula and formatting to use to achieve the right results.

This is what Lewis finds in the spreadsheet: 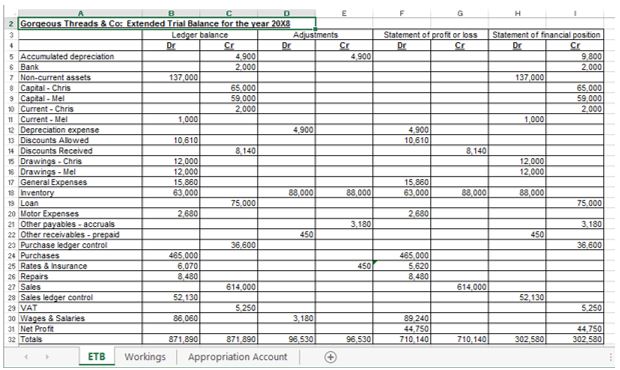 Lewis starts by pulling through the net profit from the ETB:

Next he calculates Chris’s salary:

Interest on capital is linked as well but this time to both the ETB and Workings worksheets.  Chris’s will be: 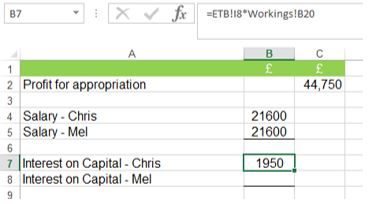 As interest on capital is 3% for both partners its cell reference can be made absolute* in formulae, enabling Lewis to drag the formula from B7 to B8 to calculate Mel’s interest: 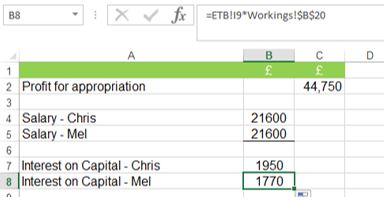 Please note, calculating interest on capital has been included here as a spreadsheet skill rather than an accounting one.

Next Lewis needs to calculate all the subtotals: 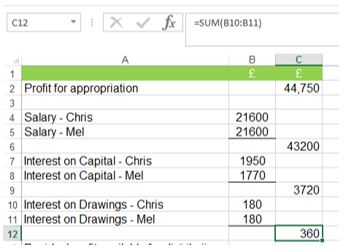 Lewis is going to use the subtotals to calculate the how much profit is left for distrubution. However, he needs to think about the accounting theory first:

Therefore, he write the following formula: 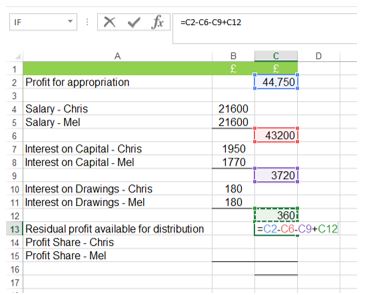 Lewis calculates that the residual available for distribution is actually a loss of £1,810. Again he thinks about the theory before he continues:

He has applied the first point and now shares the loss by linking to the profit sharing ratios on the Working sheet and absoluting the loss figure in C13 on the Appropriation Account worksheet: 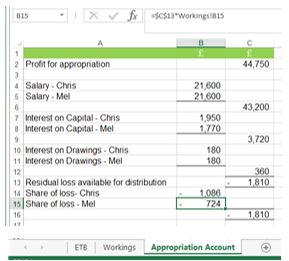 He also calculated the final subtotal and checked that it matched the -£1,810, reformatted columns B and C to remove the inconsistencies and amended the headings.

Lewis is sure his work is correct but is unsettled by the loss. He therefore talks to his manager who asks him to write short but clear notes which firstly explain appropriation accounts, then analyse Gorgeous Thread’s appropriation account and finally identify the result.

This is what he writes: 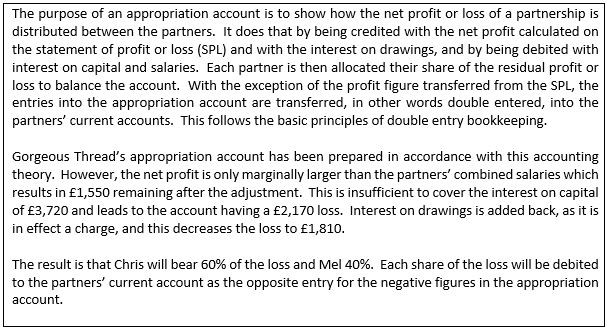 Lewis’s manager is impressed with his notes, commenting that they are comprehensive but concise and will effectively communicate the points to Chris and Mel as neither of them have financial backgrounds.

As Lewis has shown an aptitude for writing his manager has asked him to prepare some further explanations, for a new apprentice who will be joining the team, on the interrelationship between financial and management accounting, which we will look at in part four.

* This means that when the formula is dragged from one cell to another, the cell with the absolute referencing will stay the same, in other words it’s the opposite of relative cell referencing.

Read the next article in the series: Advanced aspects of short-term decision making.