This is the first article in our 2-part series on the accruals concept.

Income generated must be matched with expenses incurred, within a financial period, regardless of when the money is paid or received.

What is a prepayment?

A prepayment is an expense or some income that has been paid for or received this financial year but that belongs (needs to be matched to) next year.

Theory:    Income generated must be matched with expenses incurred ……

Practice:   We must match up the accounts on the statement of profit or loss (SoPL), including the expenses that have been spent to generate the net sales figure.

The periods don’t match.  Within our financial year we need to include the last two months of the previous insurance policy and ten months of this policy.

Theory:     …..regardless of when the money is paid or was received.

Practice:    We are likely to pay for the insurance policy in one lump sum. So the expense incurred will have gone through the bank account in June and will cover all twelve months of the policy. Because the periods don’t match though, we can only include ten months on this year’s SoPL to match with this year’s sales, even though it’s all been paid for.

The other two months need to be pushed forward into next year’s accounts as that’s where they belong. In other words, two months of the policy have been pre-paid for next year. This has the effect of reducing this year’s expenses and increasing next year’s.

Let’s assume last year’s insurance cost £600 which would be a monthly amount of £50. If the annual premium has increased to £660 this year, the monthly cost has become £55.

To correctly match the insurance expense to our financial year we need:

We have to learn that there are three elements to these year-end adjustments:

Once you have a prepayment or an accrual then it is likely to continue in the same pattern year after year as it becomes a cycle: 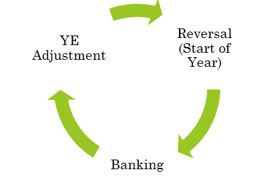 How is this reflected in the accounting records?

Let’s say our year-end is 31st March. Last year we paid £600 for our insurance. However, we needed two months of that to be included in our current year. Therefore, at the end of last year we would have reduced the insurance by £100 and double entered that into the prepayments account.

By doing that we made a provision for the prepaid amount, just whilst we moved from one year to the next.

The balance on the prepayments account is shown on the statement of financial position (SoPF) as a current asset. This is because we own those two months of insurance, as the policy was paid in full in June but they can’t be matched to this year’s income so must not be included in the SoPL.

That was the position at the end of last year.  Now we need to think about this year’s accounts.

2. Accounting for this year’s activity ie. what money has gone through the bank:

Finally, we have to decrease this year’s insurance expense because the last two months will be for next year.

All we need to do now is write off the balance on the Insurance account to the SoPL and balance the Prepayments account and show it on the SoFP.

Then the cycle will start again.

It might be worth pointing out that in this example we’ve done a lot of work for the sake of a net adjustment of £10. However, when the figures are scaled up for larger organisations and multiple transactions, then the zeros add up. If the concept of accruals was not applied the impact on reported profit figures would be significant.

In part two we’ll have a look at how the same theory of matching is applied to adjustments for accrued expenses as well as prepaid and accrued income.

Join us on May 1st and learn how to present effectively in Excel from expert Deborah Ashby.