Accounts preparation is tricky, to do it successfully we have to understand what we’re doing, as well as why.

In this article we’re going to focus in-depth on irrecoverable and doubtful debts.

What are irrecoverable debts?

Amounts owed to a business that it believes will never be paid.

If a business makes sales on a credit basis then it sells goods or services to customers, agreeing that payment will be delayed for a period of time, usually 30 days.  The timing difference between the sale and payment therefore creates the possibility of debts not being settled.  This can be for a number of reasons such as a dispute, a contract falling through or the customer’s business going into receivership.

Regardless of the reason, once the supplier knows or feels that a debt will not be paid then it is considered irrecoverable and needs to be accounted for as such.

They increase an organisation’s expenses and reduce the value of its trade receivables.

If the invoice for a credit sale is unpaid then it doesn’t alter the fact that the sale took place and consequently the value of the invoice will be included in the balance of the Receivables account.

Once we know it is irrecoverable, the receivables balance will need to be reduced because the expected funds will not be received.  If left unadjusted the current assets on the Statement of financial position (SoFP) will be overstated.  The sales figure on the Statement of profit or loss (SoPL) is not adjusted as the sale was generated, however, its value will be offset by the Irrecoverable Debts account which is an expense.

What is the difference between an irrecoverable debt and the allowance for doubtful debts?

When we know for certain that a debt will not be paid then it is written off as irrecoverable.  It is prudent to do that as soon as we are informed that a customer has gone into liquidation or after we have chased a customer through credit control processes to the point that we give up and accept the loss.

However, at year end it is also prudent to acknowledge that some of the debts making up the balance of the Receivables account will not be settled and whilst we are unaware of which ones they will be, we should make contingency arrangements for that event.

This contingency is the allowance for doubtful debts, and is often calculated as a percentage of the year-end balance of the trade receivables.

What is the difference between a specific and general allowance?

In what order are adjustments made at year-end?

If there are any irrecoverable debts then these must be written off first and then the receivables account re-balanced.  Next any specific doubtful debt allowances should be totalled and a calculation undertaken to find the value of the remaining debtors.  This figure is then used to calculate the general allowance.

How are the adjustments reflected in the accounts and on the financial statements?

At the end of GM Manufacturing’s first year it had receivables of £15,567.  This included an invoice for £125 for a customer that had just gone out of business.  It also included invoices for £120 and £180 which were five months old and looking unlikely to be settled.  It was decided that a general allowance of 1% of receivables would be prudent.

Prepare journal entries to write off the irrecoverable debt and create the allowance for doubtful debts to be used in the financial statements.  Show your workings and round your answers to the nearest whole £.

Step 5 – Combine the specific and general allowance into a single journal:

What do we do when a business is a going concern?

Once a business is through its first year of trading it is likely to have a balance on the Allowance for Doubtful Debts account each year.  This then needs adjusting either up or down depending on the current year’s credit control.

At the end of GM Manufacturing’s second year it had receivables of £25,954 and the balance on the Allowance for Doubtful Debts was £451.  An invoice for £1,200 needed to be written off as irrecoverable and a general allowance of 3% of receivables was agreed.*

Calculate the balance on the Allowance for Doubtful Debts account, prepared the adjustment journal and show extracts from the financial statements. Round your answers to the nearest whole £. 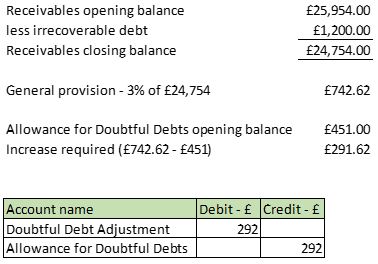 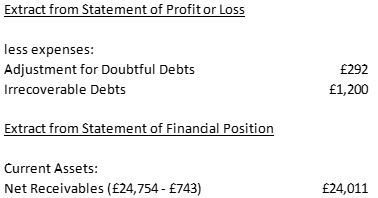 What happens when the year-end adjustment requires the allowance for doubtful debts to decrease?

The Allowance for Doubtful Debts account is debited by the difference between its opening balance and the amount the general allowance needs to be.  The adjustment is listed under ‘other on the SoPL in the same way as the adjustment for the profit on a disposal.

For example, if the year two general allowance had 0.5%:

What is the underpinning theory?

Irrecoverable and doubtful debt adjustments are the application of both the concept of prudence, as they ensure that assets are not overstated, and the accruals principle because they match the expense to the financial period in which the income was generated.

* Please note that when there is a change of accounting policy, such as the percentage used to calculate the doubtful debts allowance, it is communicated by a note to the accounts.