Brexit is the biggest legislative change in the UK since World War 2 – so what are the implications for bookkeepers?

There are many myths and uncertainties around how Brexit will unroll, and there are opportunities to be found too for the bookkeeper who wants to advance their career as Brexit’s uncertain landscape is navigated.

Firstly, don’t be alarmed by reports of a ‘Great Repeal Bill’ that might suggest existing laws are going to be torn up and rafts of new UK legislation will be brought in to replace them. “Fundamentally the legislation will be similar to what we’ve had as UK law before,” says Brian Munjanja, Director at Broadwing Accountancy Services. “Laws will not be revised as if the current way of the world is trading differently all of a sudden. We won’t be overwriting the EU Directives; they make sense, and they are there to service businesses.” Instead, the vast majority of EU law will be converted into UK law – with as little change as possible. “Much EU law is sensible and fit for purpose. The key is to be prepared, but aware that at the moment so much is speculative.”

Where there is likely to be movement is with VAT – and this is something bookkeepers need to keep an eye on. “VAT rules are likely to change – for example, VAT thresholds with regards to distance selling.” At the moment, Munjanja says, firms selling abroad don’t have to register for VAT in the country they are selling to if they come below certain thresholds – Є35,000 in Ireland and Є100,000 in Germany and France, for instance. This could all be up in the air after Brexit. “That might deter businesses from operating abroad, but bookkeepers will need to keep up to speed with whatever changes.” As another example, consider goods that are currently zero-rated. “This kind of thing will be part of the larger trade agreement talks. It depends on how freely goods can move between EU countries; will there be impacts on particular services and goods?”

One of the key arguments in favour of Brexit was that it was supposed to cut perceived EU red tape. In fact, when it comes to imports and exports, we’re now likely to encounter more red tape, not less. “For any bookkeepers working with companies that were used to the single market, things are going to be different – although we don’t know exactly what will happen,” says Paul Connolly, Director of the Tax Shop Group. “Although Brexit is a threat, it may also be an opportunity for bookkeepers – especially those who are knowledgeable about the impacts for export and import in the future.” Is there an opportunity for bookkeepers to become go-to people when it comes to companies wanting to know how Brexit has changed the landscape? “Yes. If I want to trade with Europe – what do I need to know? What are the tax implications? What can I do now that I can’t do in the past, and vice versa? You can generate quite a lot of new business from this if you stay on top of it.”

Indeed, reckons Connolly, “bookkeepers can create work here that perhaps accountants won’t want to pick up on. Accountants for example will want to remain with corporation tax which is very separate from Brexit. But if you become a VAT expert in the new climate, you make yourself very desirable. It’s the simplest tax to calculate but comes with the most rules – so you will be a winner if you become an expert.”

“It’s an exciting time to be a bookkeeper,” Munjanja adds. “To an extent bookkeepers have always been go-to people, but now the process itself has evolved so much.” Not so long ago, you could spend significant amounts of time “sorting out pieces of paper in order to get them onto a software package. Today, things are so sophisticated that you can create plenty of other mini-roles for yourself – to advise, to give a view on business health, to spot opportunities.”

“We’re still waiting to see what will happen to business and whether it will suffer or thrive under Brexit,” Munjanja says. “The benefits of cloud-based accounting, for example, mean that it’s become very easy to be a bookkeeper for a client who is based abroad. You can work with them from the UK and expand your business internationally.” But after Brexit, what rules and regulations might there be affecting that? “We may still be able to work exactly as we did before – on the other hand, there are all sorts of unforeseen possibilities ahead. At the moment, it doesn’t matter if you are based in France or Belgium – but once UK laws start to diverge from the EU, situations may change.” We just don’t yet know to what extent, Munjanja concludes. 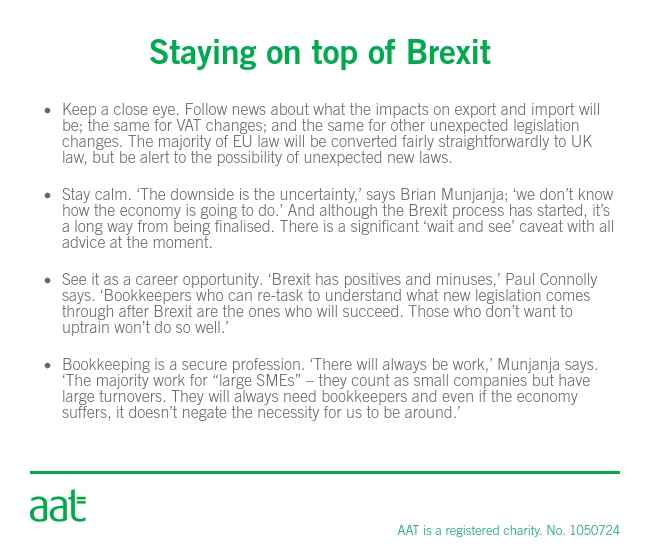