AAT members are getting exclusive access to a new data visualisation tool from Lloyds Bank to help them improve their advice to business clients.

Lloyds Bank has developed the Working Capital Tool for its business team to unlock working capital within its clients’ businesses.

AAT’s Licensed Accountants were the first group outside of Lloyds Bank to be given access as part of a pilot in December 2018, and now AAT’s professional members are being given the opportunity. The tool will allow them to model different scenarios and construct competitor analysis that can lend extra credibility and authority to client consultations.

The pilot was launched during a recent seminar when a select group of AAT licensed accountants were invited to a demonstration of the tool by Graham Millward, Client Manager at Lloyds Bank.

Attendees were shown two scenarios which showed how financial strategy could be drastically improved by modelling different approaches.

The first example featured a client planning that came to Lloyds expecting to need £250,000 of working capital to fund planned growth of 10% in its business over the next year.

Using the Working Capital Tool, Graham examined the company’s last two years’ performance based on debtor days, creditor days and stock days. The company was performing well but had slipped back a little based on the previous year’s metrics. So Graham asked, ‘what would happen if they got back to the levels of their most efficient year’?

The answer was dramatic; Instead of requiring £250,000, the company would be able to fully fund its own growth.

Graham pointed out that adverse change in stock, debtor and creditor days can be for sensible reasons such as a conscious decision to acquire new customers whilst having to offer extended terms.  In this example, the company had brought on new products with a longer manufacturing process which was pushing out debt turn.  However, the adverse movement in creditor and debtor days was not expected and certainly gave the business something to consider. 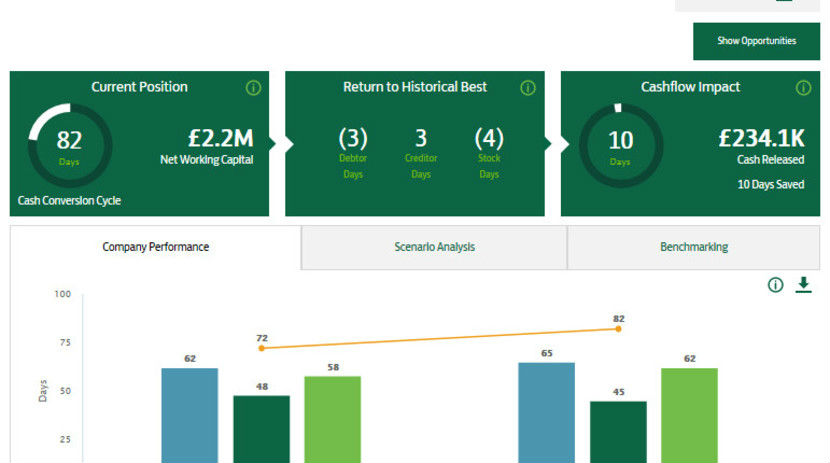 If the company returned to its best performance on debtors, creditors and stock, it could release £234,100 of cash and completely fund its growth.

The second illustration featured a company enjoying rapid growth, generating lots of cash and therefore with no obvious borrowing need.

However, it was taking nearly 60 days to pay creditors and Graham asked what early settlement opportunities would be available with their suppliers.

The Working Capital Management tool was able to calculate the funding requirement associated with paying all suppliers a month sooner and this was used to establish the “break-even” value of early settlement discount that the company could ask for in the knowledge that the discount available would offset the associated interest cost.  The Working Capital Management tool established that any discount over just 0.25% would make the business more profitable.

Participate in the trial

At the end of the evening, AAT members were given the opportunity to get free access to the tool, initially on a 6 month trial basis.  This will allow these members to use the tool to have high quality conversations with their clients about working capital and also exceed their expectations by helping them locate and release capital from within their business.

If the trial goes well, the members will retain their access and the access will also be extended to more AAT members – free of charge.

If you’re interested in being part of the Working Capital Tool trial you can find out more by emailing the Lloyds team AATMemberWCTSupport@LloydsBanking.com