The aim of this article is to cover:

What is a trend?

A trend is described as general movement of data over time. A trend can be positive or negative depending on the data in question.  Once calculated, trends can be used as a means of analysing historic data so that forecasts can be made for the future. A classic example of trend analysis would be in the retail industry, where sales of goods could be analysed over time and the underlying trend could be calculated.  In turn, the underlying trend can then be used to make forecasts for sales in the future. Once a forecast has been made then the business can be managed accordingly, for example inventory management, decisions about whether to continue selling certain products and whether the business needs any further investment to support growth.

How is a trend calculated? 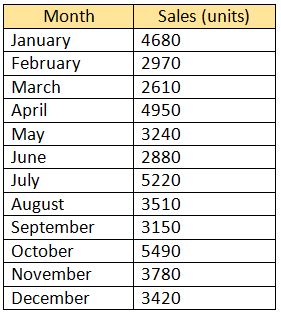 It is clear here, that any trend or underlying pattern is not easy to spot. If we plot this data on a graph we can see that the data is ‘messy’. 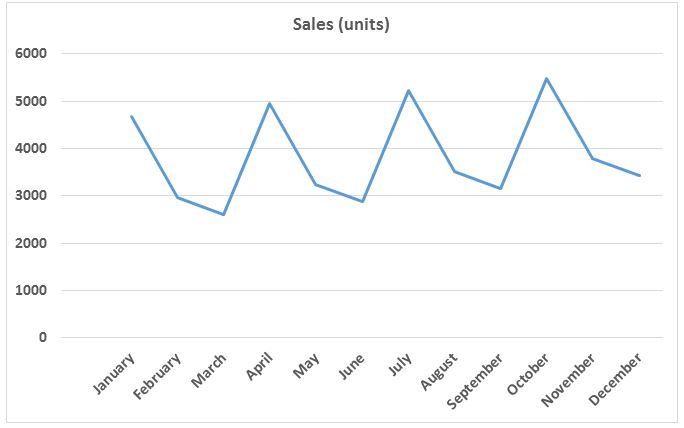 By calculating the moving average the underlying pattern of the data will emerge. It is important that at this point it is recognised that there will not be a moving average for January or for December as we have insufficient data to calculate them. 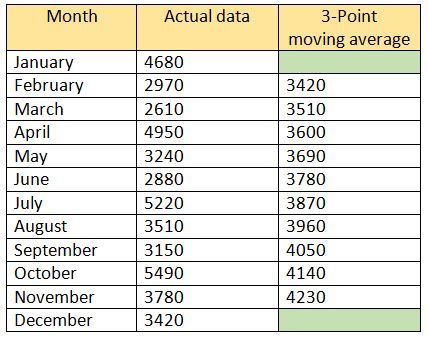 The three point moving averages show a clear pattern, increasing steadily every month.  We can apply the following formula to calculate the average increase in trend per month:

Transferring our own data into this formula:

This calculation tells us that the underlying trend is an increase of 90 units per month.

Plotting the trend line on a graph 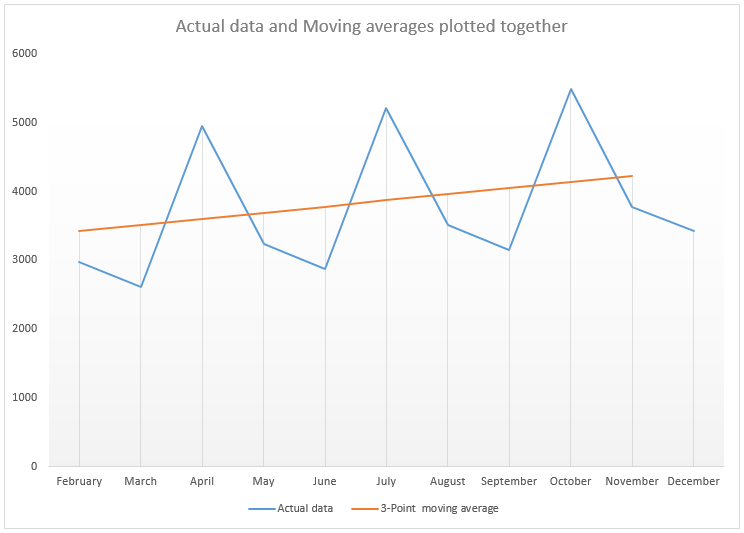 Seasonal variation can be described as the difference between the trend of data and the actual figures for the period in question.  A seasonal variation can be a numerical value (additive) or a percentage (multiplicative).  The term ‘seasonal’ is applied to a time period, not necessarily a traditional season (summer, autumn etc.).  For example sales may be a lot higher for a store around Christmas, but lower in January.

As we have established previously, the graph cannot extend beyond November (trend line) and December (actual data) because we have insufficient data.  We now need to be able to work with what we have, in order to make forecasts for the future months and years.  The ability to make forecasts for the future is a fundamental aspect of management accounting as it enables a business to make realistic and informed decisions.  It is a realistic scenario that a business owner would like a projection of future sales revenue and trend analysis would be a useful tool in answering this question.

In order to make a forecast, we will have to take into account two factors:

The key formula connecting our data is as follows:

This formula can be switched around:

It will be this last formula that will be used to find the seasonal variation for our data. 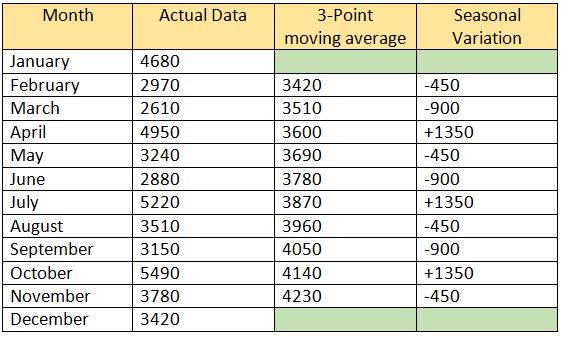 Now we have established the variations, it is clear that they are operating on a repeating cycle (-450 then -900 then +1350).  These sorts of seasonal variations could occur in numerous industries.  An example of an industry which may find it operates on a pattern similar to the one we have calculated is a pharmacy which despatches prescriptions of contact lenses on a quarterly basis. The pharmacy may find that customers rush in at the end of a quarter to collect their prescription but in the other 2 months they are not as busy.

Now that we know the average trend movement (+90) per month and the seasonal variation cycle, we can make forecasts for future time periods.  This can be accomplished by doing the following:

**the relevant seasonal variation depending on the month required 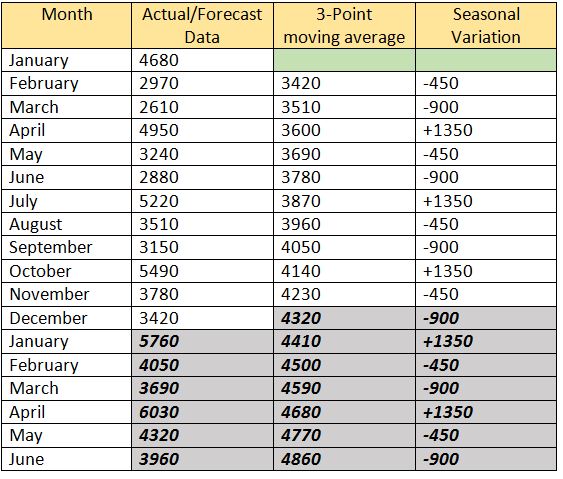 The graph below shows an extended version of the graph previously used.  It demonstrates the forecast data beyond the limitations (time constraints) of the data we were given. 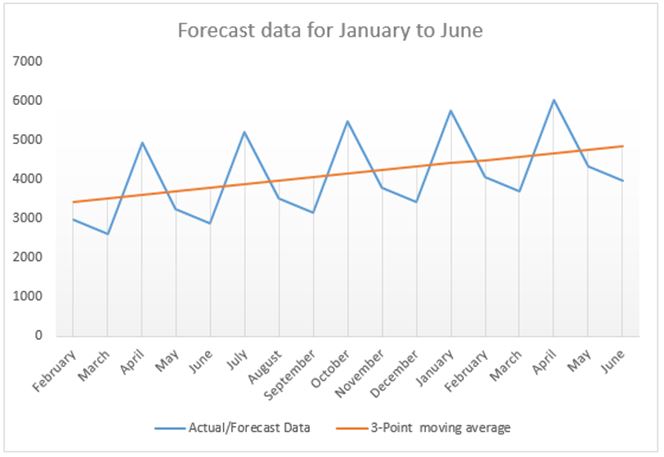 Why is this useful?

A management accountant could use this technique to make forecasts.  This would then be communicated to either their own manager, or perhaps a client they are working for.  If a trend is negative, it could be that this forecast is used to predict when sales for a product are going to drop below the break-even point and hence stop becoming profitable.

Trend analysis is not only useful for sales figures but also other areas of different businesses such as production and purchases.

When using trend analysis it is always important to bear in mind that the further into the future our forecasts are, the less reliable a forecast will become.  Nobody can realistically predict the future and although the seasonal variations in this example are neat and tidy, what happens if there is a flood? Or suddenly the product we are selling becomes obsolete?  Obviously the forecast would not be an accurate one in this situation.

Earlier in the article, the case study looked at a three point moving average.  When looking at a four (or any even number) point average there is a little bit more work to do.  The following is an example of what to do when faced with an even number moving average.  Imagine for example you were analysing data based on four month periods:

The completed table which could be used for forecasting purposes can now be constructed. 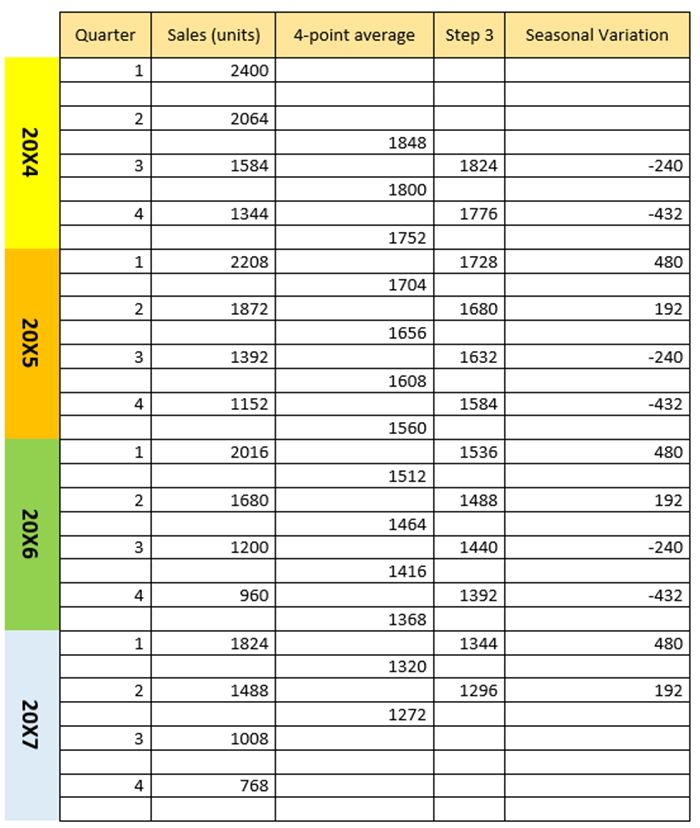 ** The relevant seasonal variation depending on the quarter required

Forecast Sales for 20X8 are therefore as follows:

This article has shown how to calculate trends, analyse them and use them to make forecasts for the future.  The skills used are important for Financial Performance, Budgeting and the optional Cash Management unit.  The skills are also transferable to the workplace, where analysing patterns can be part of the role of a management accountant.  Communicating findings to either the management of the business or clients will potentially be of paramount importance.