Key term: A standard is prepared by management in advance, and details their expectations of the future. It is an estimate of what should happen.

Standards are not just for items of production in manufacturing businesses. They exist in many different spheres.

Standard times for repairing cars, standard punctualities for train companies and standard response times for ambulances are just some of the many examples encountered.

Some of the uses of standard costing are as follows:

Key term: Variance analysis reconciles actual to budgeted costs, revenue or profit. It’s a way of explaining the difference between actual and budgeted results. They can be either favourable (F) – better than expected, or adverse (A) – worse than expected.

The following are the labour variances that may need to be calculated and the approach which can be taken to calculate these:

The total variance can then be broken down into the following sub-variances:

Moona Co. manufactures one product, the HAAN, and the entire product is sold as soon as it is produced.

The company operates a standard costing system and analysis of variances is made every month. The standard cost data for labour for the product, is as follows.

Actual results for June 20×7 were as follows:

To calculate the Total Labour Variance and the Rate, Idle Time and Efficiency variances, the approach will follow that detailed in the variance analysis section above.

Note that this variance calculation has been based on the actual production of units of 4850. What should 4850 units cost, compared with what they did cost for labour (comparing like with like units of 4850 on both lines above in the calculation and so using a flexed budget approach).

Because the actual cost incurred to make the units (£160,800) was lower than expected (£194,000), therefore the total variance is favourable.

Once again because the actual cost of the paid hours is lower than expected, the variance is favourable as we have performed better than expected. A possible reason for this could be less qualified staff were used to make the product, and were paid at a lower rate than expected.

Idle time is not good.

Hence this variance will be adverse.

This could be due to stoppages in production because demand was lower than expected or due to a shortfall in materials which resulted in delays in production.

It could also be caused by workers completing the work in less time than expected, creating spare capacity in terms of labour hours.

The efficiency variance is favourable as we expected to take 9,700 hours to make the units (the standard hours) but only actually took 8,000 hours, meaning we worked efficiently as less time was taken leading to a favourable variance.

Given that possibly lower quality staff were used as denoted by the rate variance, it may well be that the standard set was a poor one and the two hours expected time to produce a unit, was too generous. This links to the Idle time variance where workers were paid for more hours than worked. 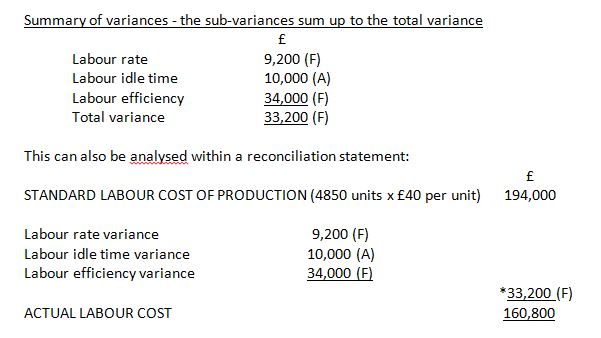 This can also be analysed within a reconciliation statement:

*The £33200 (F) variances are deducted in the reconciliation statement, as we have performed better than expected and so our actual cost will be lower.

Labour variances are important to controlling costs. As well as having an understanding of how to calculate variances, you will also need to be aware of the possible reasons why these variances may occur.

We need to be able to advise management of possible reasons for variances to allow proper investigation of both adverse and favourable variances.

Nisar Ahmed is Head of AAT Programmes at BPP.