AQ2016 standards are now with us and one of the changes at L2/Foundation is the inclusion of the High-Low technique to separate a total semi-variable cost into its variable and fixed elements.

It is worth noting that it is still assessed at L3/Advanced so it’s relevant to everyone studying Costing at either level.

In order to successfully understand and use this technique we first need to be clear about how costs are categorised and this is based on how they behave.  Plus, we have to be able to calculate both fixed and variable costs from costs per unit, total costs and a measure of quantity, for example; units, litres, tonnes, minutes etc.  If this doesn’t sound familiar, then my previous article on Fixed, Variable and Semi-Variable costs, is worth reading before you continue.

As the total of a semi-variable cost is calculated by adding together the fixed and variable elements, we can use our understanding of this to re-write the equation as we need it.  The following three equations are really all the same:

We are going to use these different methods of calculation in the three steps required for High-Low:

Here’s how it works in theory:

In the previous article we looked at call charges and we knew the cost for 100 minutes was £34 but that for 180 minutes it increased to £58.  As the total costs were different at the two levels of output we already knew this wasn’t as fixed cost.  Therefore, we calculated the cost per unit to see if it was variable.  It turned out that the variable costs per unit were different too, so it wasn’t that either.  Consequently, we deduced that the cost of the calls must be a combination of a fixed element and a variable element which made it semi-variable.

Here’s how the High-Low technique proves our deduction was correct: 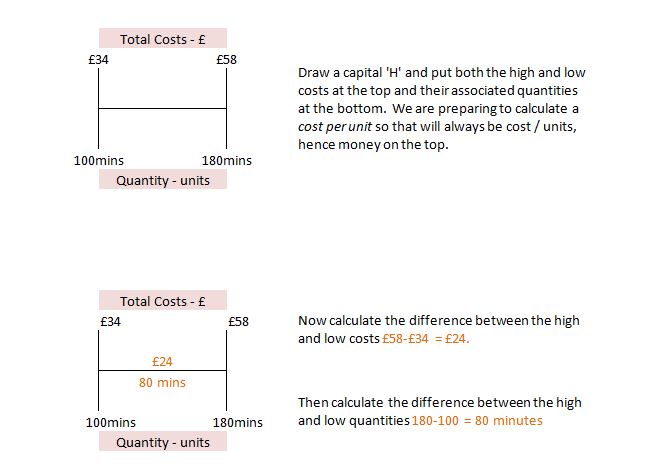 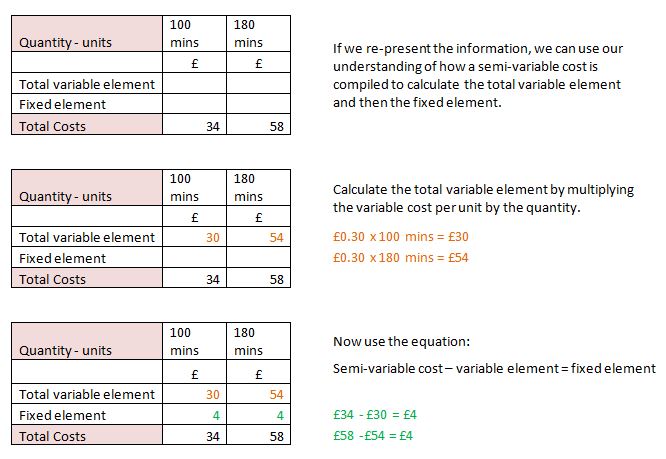 Using the High-Low technique has allowed us to prove that the original costs were actually semi-variable rather than just deduce that conclusion.  We can clearly see that the fixed element has not changed with output and that the variable cost per unit is the same at different levels of output, meaning the total variable element will vary in direct proportion to output.

Using this understanding of cost behaviour, the fixed cost of £4 and the variable cost per unit of £0.30 per minute we can now predict what the total semi-variable cost would be at other levels of activity.

Let’s suppose we expect our calls to go up in the near future.  What will the total cost be for 350 minutes?

Now we can use the equation: Fixed element + variable element = Semi-variable cost

The High-Low technique looks complicated and does trip you up if you don’t fully understand how costs behave.  The best way to tackle semi-variable costs is to strategically go through the steps.  In my experience remembering what to do with the variable cost per unit is a common hurdle and being tempted to skip calculating the fixed costs at both levels.  If you can avoid those pitfalls you’ll be on the right track for predicting total costs at different levels.  Just out of interest, what would the total cost be if we used 600 minutes?

Answers in the comments please.