FRS 103 Insurance Contracts – Consolidated accounting and reporting requirements for entities in the UK and Republic of Ireland issuing insurance contracts was issued by the Financial Reporting Council (FRC) in March 2014 as part of the new suite of standards which form new UK GAAP.

FRS 103 applies to financial statements which are prepared under the principles of FRS 102 The Financial Reporting Standard applicable in the UK and Republic of Ireland and which are intended to give a true and fair view. FRS 103 applies to:

FRS 103 itself is only going to have a limited lifespan and the FRC expect to review the standard once the International Accounting Standards Board (IASB) has issued its updated standard on insurance contracts.  The IASB have said that this is due to be published towards the end of 2016.  This article looks primarily at the issues concerning insurers’ accounting policies under FRS 103.

There are certain aspects which FRS 103 does not deal with, which are outlined in the following table: 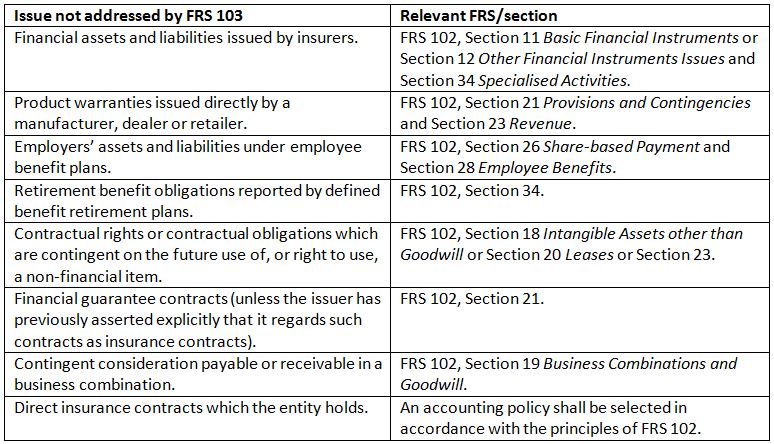 An insurer is allowed to change its accounting policies for insurance contracts if, and only if, the change makes the financial statements more relevant to the economic decision-making needs of the users and no less reliable, or more reliable and no less relevant to those needs.  When an insurer is considering changing its accounting policies, it must justify how the change will bring its financial statements closer to meeting the criteria outlined in paragraph 10.4 of FRS 102.  Paragraph 10.4 of FRS 102 requires that management develop accounting policies which results in information that is:

Paragraph 2.5 of FRS 103 allows an insurer to change its accounting policies so that it remeasures designated insurance liabilities to reflect current market interest rates.  Any changes to such liabilities are recognised in profit or loss.  In addition, paragraph 2.5 also allows an insurer to change its accounting policies for designated liabilities without applying those policies consistently to all similar liabilities which would otherwise be required by Section 10 Accounting Policies, Estimates and Errors in FRS 102.  Where an insurer designates liabilities for this election, the standard requires the insurer to apply current market interest rates (and, where applicable, the other current estimates and assumptions) consistently in all periods to such liabilities until they are extinguished.

FRS 103 allows an insurer to continue with the following practices:

If the Regulations permit, an insurer can overcome the rebuttable presumption described above if, and only if, the other components of a change in accounting policies increase the relevance and reliability of its financial statements sufficiently enough to outweigh the decrease in relevance and reliability caused by the inclusion of future investment margins.  Paragraph 2.9 cites an example of an insurer whose existing accounting policies for insurance contracts involve excessively prudent assumptions that are set at the inception of the contract with a discount rate prescribed by a regulator without direct reference to market conditions and ignoring some embedded options and guarantees.  The example suggests that the insurer may make its financial statements more relevant and no less reliable by switching to a comprehensive investor-oriented basis of accounting that is widely used and involves:

Often realised gains or losses on an insurer’s assets will have a direct effect on the measurement of some, or all, of the insurer’s:

FRS 103 allows (but does not require) the insurer to change its accounting policies in such a way that an unrecognised gain or loss on an asset affects those measurements in the same way as a realised gain or loss. When the insurer applies this method, any adjustment to the insurance liability, deferred acquisition costs or intangible assets is recognised in other comprehensive income if, and only if, the unrealised gains or losses are recognised in other comprehensive income.  This practice is described as ‘shadow accounting’.

FRS 102 at paragraphs 10.4 to 10.6 outlines how an entity’s management is to use its judgement in developing and applying an accounting policy when an FRS or an FRC Abstract does not deal with a transaction, event or condition.  FRS 103 exempts an insurer from these paragraphs in FRS 102 in relation to its accounting policies for:

In respect of the liability adequacy test noted above; an insurer has to undertake an assessment at the end of each reporting period to assess whether its recognised insurance liabilities are adequate.  The insurer uses current estimates of future cash flows under its insurance contacts for the purposes of this test.  If the test reveals that the carrying amount of the insurer’s liabilities (less related deferred acquisition costs and related intangible assets) is inadequate in light of the estimated future cash flows, the entire deficiency must be recognised in profit or loss.

In May 2016, the FRC issued amendments to FRS 103 to reflect the implementation of the Solvency II Directive from 1 January 2016.  The amendments update the terminology and definitions used for changes in the regulatory framework following the implementation of the Solvency II Directive.  It should be noted that these amendments do not require any changes to insurers’ established accounting practices which can continue to be applied if the entity so chooses.

AAT members and Licensed Accountants that prepare financial statements for insurers will need to have a sound understanding of the requirements in FRS 103.  It is also important to bear in mind that FRS 103 will only have a limited lifespan and therefore accountants should keep abreast of developments in this area on the FRC’s website so as to be kept up to date on revisions to the standard. 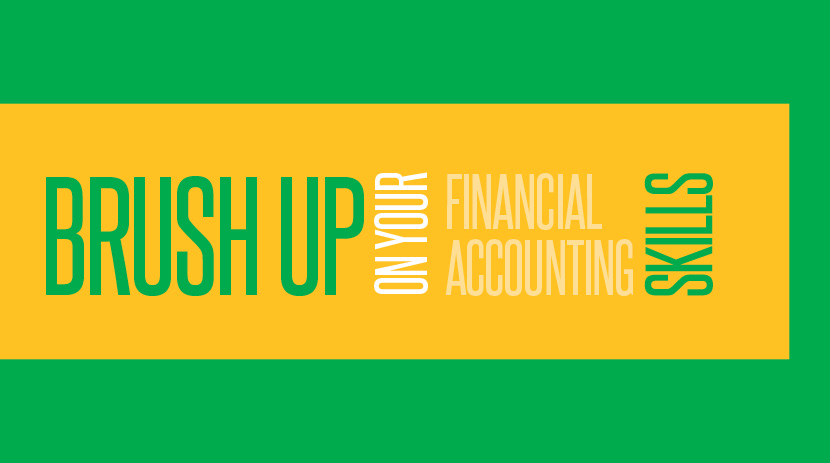