In this article we take a look at the differences found under FRS 102 The Financial Reporting Standard applicable in the UK and Republic of Ireland in the accounting for transactions and balances denoted in a foreign currency compared to previous UK GAAP. Unfortunately, accounting for issues such as forward foreign currency contracts becomes a little more complex under FRS 102, but this article will hopefully make life easier.

The complexity itself is the fact that derivative instruments for some forward foreign currency contracts will have to be recognised. The mere mention of ‘derivative financial instruments’ sends some (most) practitioners into a daze! However, the calculations involved are not complicated as we shall see further in this article.

Foreign currency is dealt with in FRS 102 at Section 30 Foreign Currency Translation. One of the most notable differences between FRS 102 and previous UK GAAP is the fact that FRS 102 prohibits the use of contracted rates (although micro-entities can use contracted rates in FRS 105 The Financial Reporting Standard applicable to the Micro-entities Regime). Under previous GAAP there were two standards relevant to entities: that of SSAP 20 Foreign currency translation and FRS 23 The effects of changes in foreign exchange rates. FRS 23 was only used by entities applying FRS 26 Financial instruments: recognition and measurement and both FRS 23 and FRS 26 were only used by listed groups (FRS 23 was identical to IAS 21 The Effects of Changes in Foreign Exchange Rates).

We will only concentrate on some of the subtler differences between SSAP 20 and FRS 102 which are as follows: 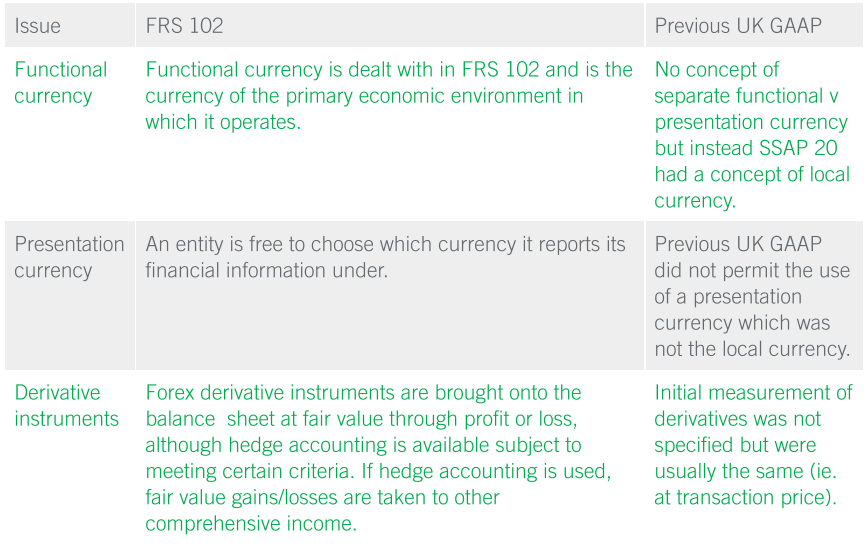 When a company enters into a forward foreign currency contract, say, one month prior to its year-end to sell foreign currency one month after its year-end, then on the date the contract is entered into the fair value of the contract will usually be nil. Over the next two months, foreign exchange rates are likely to fluctuate and these fluctuations will generate a value for the forward foreign currency contract and it is this value that will be reported on the balance sheet and any changes in that value from one reporting period to the next will be recognised in profit or loss; unless hedge accounting is being applied (hedge accounting is beyond the scope of this article).

As mentioned in the introductory section to this article, the calculation of a simple derivative under a forward foreign currency contract is not complex and we shall take a look at an example of how to do this in the following example:

Under previous UK GAAP, Company A would have normally accounted for this transaction using the contracted rate (i.e. 1.65); although the company could have also chosen not to and used the spot rate at the transaction date.

Company A would have accounted for this transaction using the rate in the contract (1.65) under previous UK GAAP as paragraph 4 of SSAP 20 Foreign currency translation allowed this and hence under old UK GAAP, the company would have recognised a debtor of £72,727 (being $120,000 ÷ 1.65).

FRS 102 at paragraph 30.7 requires the foreign currency transaction to be recorded at the spot rate at the date of the transaction, hence under FRS 102 the company will translate the sale at 1.63, hence:

As the contracted rate cannot be used under FRS 102, a derivative instrument is recognised on the balance sheet, calculated as follows:

The loss has arisen because of what has happened with the exchange rates.  If Company A were to sell at the year-end forward rate of 1.62 they would receive £74,074, but as they are selling at a contract rate of 1.65 they would only receive £72,727 and hence a loss has been generated on the contract at the year-end which has to be recognised in the financial statements as follows (note the company is not applying hedge accounting):

Under SSAP 20 no entries would have been needed had the company accounted for the transaction at the contracted rate.

Company A will have to work out the foreign exchange gain or loss as follows:

The entries at 30 April 2017 in respect of the derivative instrument are:

Clear the derivative and the debtor. 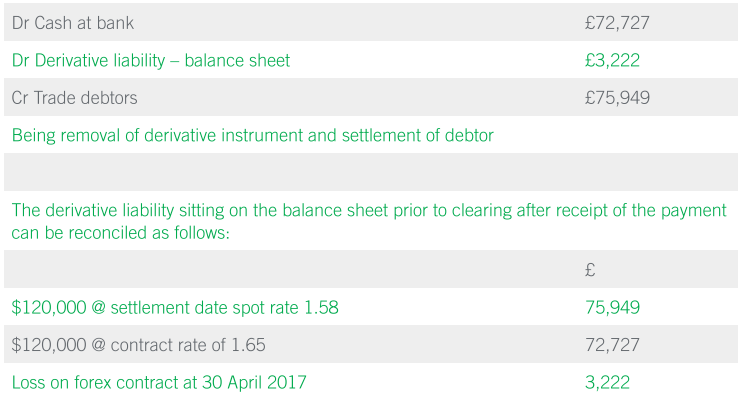 The £3,222 loss on the derivative represents the loss that Company A has made by taking out the forward foreign currency contract. In other words, the company would have received £3,222 more had they undertook the transaction using spot rates. 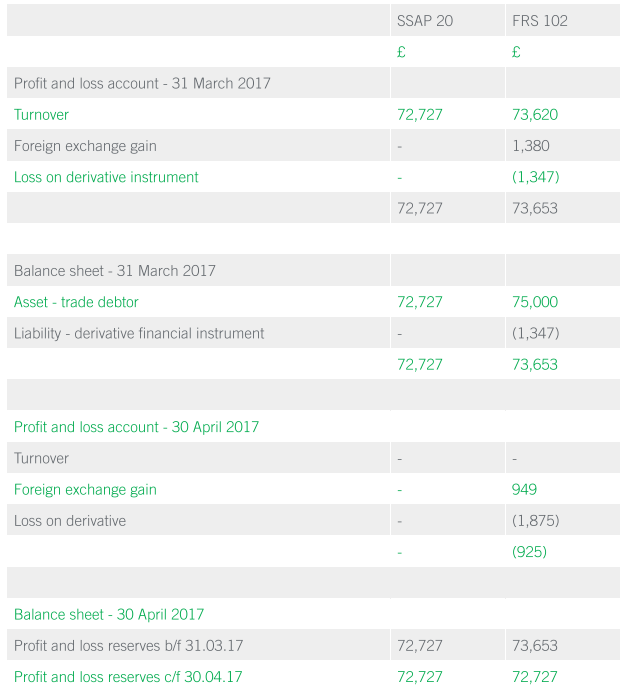 An important point to understand where FRS 102 is concerned is that the standard does not allow the contracted rate to be used for forward foreign currency contracts which previous UK GAAP did.  This will mean accounting practices will have to change where reporting entities enter into such contracts. The end result is still the same as under previous UK GAAP, but there will be additional balance sheet and profit and loss account volatility where forward foreign currency contract derivatives are concerned (unless, of course, hedge accounting is being applied).