In practice, it is not uncommon to see loans to/from a small company or an intra-group loan, which is unstructured (i.e. they do not have formal loan terms attached to them) and, therefore, FRS 102 would regard the loans as being repayable on demand.  The consequence of this is that where the borrowing group member had previously recognised such a loan in long-term liabilities under old UK GAAP, it is recognised as current in FRS 102.

The other ‘workaround’ would be to make the loan a 53-week loan; although where, for example, the group is audited, the auditors will eventually ask questions as to what the substance of the arrangement actually is if the 53-week term just rolls on!

While many intra-group loans within a small group, or loans to/from director-shareholders in a small company are unstructured, this is not the case across the board.  Keep in mind that a small company can have turnover of up to £10.2m, and hence it is likely that there will be some small groups or standalone entities which enter into such loans which do have formal terms attached to them.

Where a loan is formalised and is below market rate or is interest-free, this will constitute a financing transaction.  In a group situation, the group must measure the financial asset (in the lending group member’s books) and the financial liability (in the borrowing group member’s books) at present value using a rate of interest for a similar debt instrument; for example, a rate of interest which the bank would charge on an equivalent loan to the group member.

Some practitioners acting for groups have asked what the point is in discounting such loans to present value because, at group level, the whole transaction is removed as all intra-group transactions must be eliminated for the purpose of the consolidation.

The difference between the present value of the loan and the transaction price is known as a ‘measurement difference’. 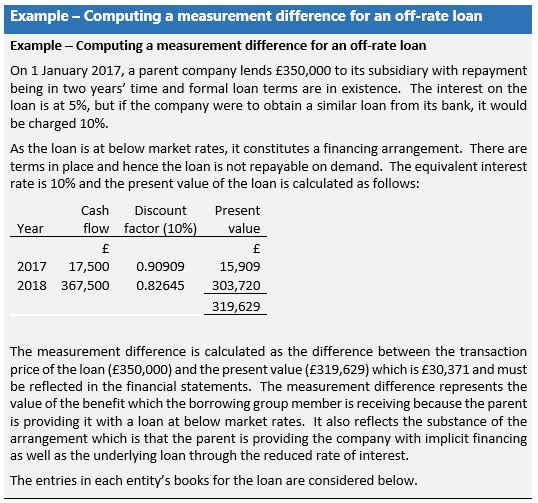 The measurement difference represents the value of the benefit which the borrowing group member is receiving because the shareholder (in this case, the parent) is providing it with a loan at below market rates (if it were to take out a loan with its bank, it would pay a higher amount of interest hence it is receiving a benefit by receiving a loan from the shareholder/parent).  The measurement difference also reflects the substance of the arrangement which is that the parent is providing the company with implicit financing as well as the underlying loan through the reduced rate of interest.

Accounting for the measurement difference

When a measurement difference arises, it is accounted for as follows: 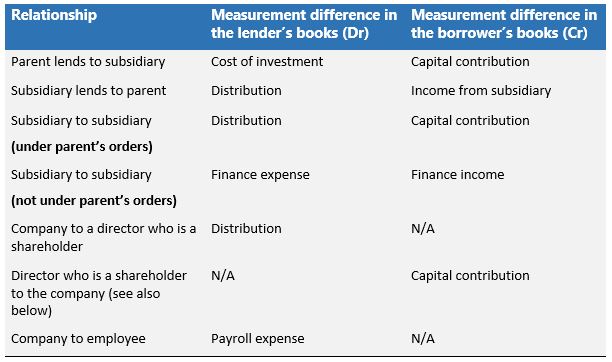 In the above example, the parent company lent money to its subsidiary resulting in a measurement difference of £30,371.  The entries in the individual accounts of the parent and subsidiary are as follows:

In the subsidiary’s books:

Feedback received by the FRC suggested there were concerns about these accounting treatments for companies at the smaller end of the scale.  Small companies may receive financing from the director-shareholders, or family members of the director-shareholders, because commercial funding may be unavailable, or the rates of interest charged by the bank may be too high to justify taking out bank finance.  This, in turn, means it is often difficult to arrive at an appropriate market rate of interest for a similar debt instrument.

In May 2017, the FRC announced that a relief was made immediately available for small companies that receive a loan from a director who is also a shareholder, or from a person who is within a director’s group of close family members when that group contains at least one shareholder. The consequence of this rule is that if the loan is from a director who is not a shareholder in the small entity, and has no close family members who are shareholders, the loan will not qualify for the relief.

The effect of this relief means that when a small company receives a loan from a director-shareholder or from a person who is within a director’s group of close family members when that group contains at least one shareholder, which is below market rate or at zero rates of interest (which these sorts of loans tend to be), the loan need not be discounted using a market rate of interest for a similar debt instrument.  In other words, the loan can be recognised in the accounting records at cost (transaction price).

Some practitioners have argued that the relief will have negligible effect given that such loans are often provided to the company with no formal terms in place; hence the loan is treated as repayable on demand which would avoid the need for discounting anyway.  However, as noted above, some small companies do have formalised loans in place and as the thresholds were increased so that a small company can have a turnover level of up to £10.2 million, there are likely to be more of these formalised loans cropping up in practice as more medium-sized entities were reclassified as small.

It should be noted that when a director-shareholder, or close family member of that director, provides a loan to the small entity at below market rates of interest (or at zero rates of interest) which is material, the loan is caught by the related party disclosure provisions in paragraph 1AC.35 of Section 1A Small Entities.  Hence the loan must be disclosed as a related party transaction on the grounds that it has not been concluded under normal market conditions.

Paragraph 1AC.35 requires the following particulars to be disclosed:

‘(a)  the amount of such transactions;

(b)    the nature of the related party relationship; and

(c)    other information about the transactions necessary for an understanding of the financial position of the small entity.’