What better tool than Excel to help us make decisions that are based on solid foundations?

And how about being able to improve both speed and accuracy of our work? That’s where IF and IS functions come in, helping us make good decisions using Excel’s logic.

Check the type of value of a cell and returns TRUE or FALSE depending on the outcome. A simple example of this type of function is ISNUMBER, which returns TRUE if the cell referred to is a number; otherwise it returns FALSE. You may use this to check that none of the numbers in your data are stored as text, which could cause problems when performing calculations.

Let’s say that we want to add a column to the top grossing films table indicating that a film grossed $2,000,000,000 or over by labelling it ‘Over’, and under two billion by labelling it ‘Under’. The formula would look like this: 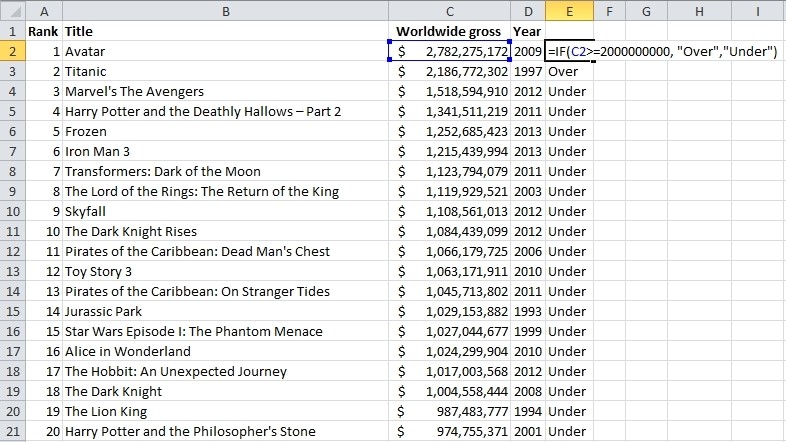 Whereas IF() is used when the outcome includes only two possibilities – one value appearing if the condition tested is true, the other if false – nested IFs are used to choose between more than two results.

A word of caution

Nesting to more than three levels can be confusing, and there might be a better way to achieve what you want by possibly using a LOOKUP function instead. For more information, check the Excel course by Filtered – in particular the module Looking up Information in a Table and the subsequent modules of the unit Lookup and Reference.

ISNUMBER tests whether a cell contains a number or not.

Returns FALSE below because that cell contains text:

Next time you need to apply more logic to your spreadsheets, try these functions. They will save you time and ensure more accuracy.

The units Using Logic To Apply Conditions and Advanced Logical Tests from the Excel course by Filtered also include videos and interactive quizzes on this topic, helping you test your knowledge in real time.