Excel tips
If you want to specify the values within a cell depending on whether a condition has been satisfied, but you don’t want to be limited to just TRUE or FALSE outcomes like with the AND or OR functions, then you can use the IF function. Let’s say that you want to add a column to the top grossing films table indicating that a film grossed $2,000,000,000 or over by labelling it ‘Over’, and under two billion by labelling it ‘Under’. The formula would look like this: =IF(C2>=2000000000, “Over”,”Under”) The syntax of this function is: =IF(condition, [result if condition true], [result if condition false]), which results in: 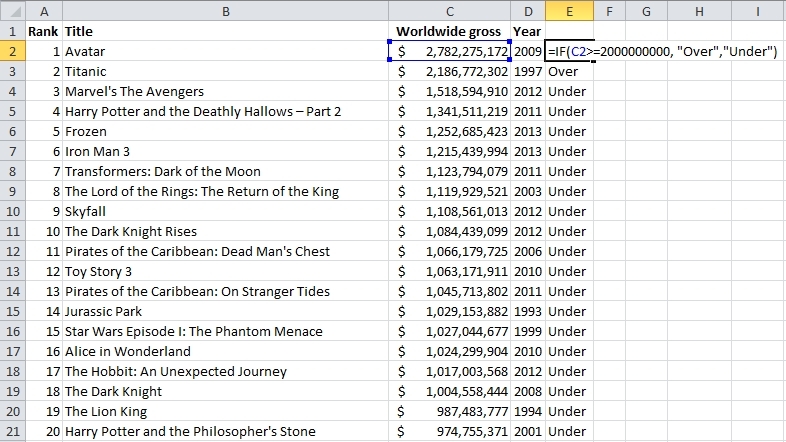 Clarify your data ranges with SUMIF

Having already introduced you to IF functions it’s time to show you some more advanced functions that can be used to clarify ranges of data – SUMIF and SUMIFS. SUMIF() The function SUMIF will total only certain cells based on specific criteria. Its syntax is: SUMIF(range, criteria, [sum_range]) Range is the range of cells that will be evaluated by the criteria; sum_range refers to the corresponding cells that are added if the criteria are matched. Sum_range is optional because if left out, the range is both evaluated and added. So let’s start by looking at a simple example containing only range and criteria. The formula in A11 is going to add the values in column A, but only those that are less than 4. This results in 6: 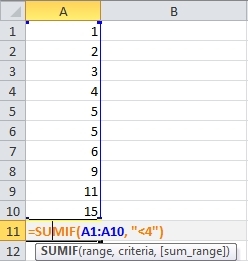 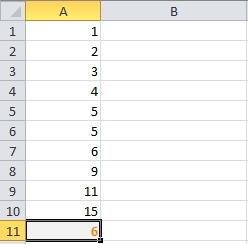 SUMIFS() The similar function SUMIFS introduced in Excel 2007 has the advantage over SUMIF() of being able to add cells that meet multiple criteria. First though let’s see how it’d be used to accomplish the same as the SUMIF() example above:

Note the syntax difference in that sum_range is required when using the SUMIFS function, and must be the first argument: SUMIFS(sum_range, criteria_range1, criteria1, [criteria_range2, criteria2], …) This final example contains more columns from which we can set multiple criteria for the SUMIFS() function. For example, to count all the apples sold in 2013, we’d type: =SUMIFS(E2:E11, A2:A11, “2013”, D2:D11, “apples”) The sum_range is all the values in column E. The first criteria_range is the years in column A, where we’ve specified ‘2013’; and the second is the fruits in column D, where we’ve specified ‘apples’:

So far we have used Excel on whole sets of data, now we focus on how to describe categories within data using the COUNTIF formula. Take a look at the table below. 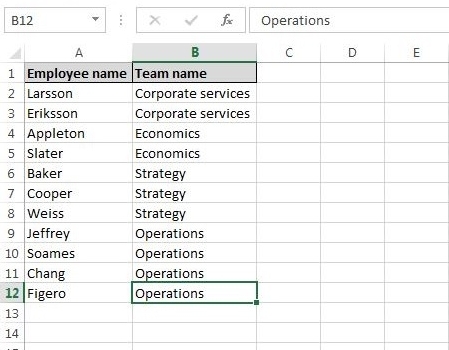 If we want to know how many employees there are in each team, we could manually count them if the database was small. If it was a bit bigger, we could sort the rows by team name (with Basic Sorting & Filtering), which would make counting manually easier. But if the database was very large, or it was subject to periodic updates, the manual method would be too time-consuming. The COUNTIF() formula counts cells just as COUNT() does, but only if their contents are something specific, using a range and a single criterion that you indicate. For example, you can count all the cells that start with a certain letter, or that contain a number that is larger or smaller than a number you specify. In the spreadsheet shown above, specifying =COUNTIF(B2:B12,”Strategy”) will take the range B2:B12 (the first input) and count how many cells contain exactly the entry ‘Strategy’. The result will be 3. Excel calls the set of cells being counted over (B2:B12 in this example) the ‘range’, and the text that selects which of those cells will be counted (in this example the contents “Strategy”) the ‘criteria’. There are a few things to note in using COUNTIF() in this way: Read more tips on Excel here Browse the full range of AAT study support resources here