Standards and frameworks recommended to keep the wayward banks in check are already well established at AAT. But it has no plans to rest on its laurels, argues Head of Conduct and Compliance, Tania Hayes

Can the accountancy profession learn from the Parliamentary Commission on Banking Standards’ report into that industry?

With the huge failings identified in the banking sector since the start of the financial crisis – and the consequent vilification of bankers – the report was always going to make for an interesting read.

But does AAT need to learn from it, or is it already a few steps ahead? The commission publicised findings in the areas of individual responsibility, governance, diversification of the banking markets, the responsibilities of regulators, and the role to be played by the Government.

Rebuilding trust and confidence in banking

These findings provide a platform on which the industry can start to rebuild public trust and confidence in the banking industry and financial markets.

The commission found a lack of personal responsibility over key decision-making leading up to the financial crisis – and it was all too easy to hide behind the guise of collective decision-making.

The now defunct Financial Services Authority’s approved persons regime – a programme that intended to create a battalion of ‘fit and proper’ decision-makers by asking executives to pass a Government-approved test – was found wanting. The commission damned it as ‘illusory’, as opposed to effective, in exercising enforcement action.

How AAT promotes compliance amongst its membership

Thankfully, there is no such lack of discipline at AAT. We already hold our members to account for breaches of professional standards. The action taken needs to be effective and proportionate and, as such, usually falls short of expulsion from the profession.

But in all cases AAT promotes the need for compliance with the professional standards we put in place. This is to ensure the public and those who rely on your professionalism can trust in the services you deliver. To address the failure of the approved persons regime, the commission suggested a senior persons regime and a licensing regime. If that sounds familiar, it’s probably because it is.

AAT can blow its own trumpet here: in our fellow member (FMAAT) designation and our members in practice scheme we already boast systems very like those suggested by the commission for the banking sector. The commission went looking for codes of standards for the banking sector. Although it found evidence of their existence, evidence of their effectiveness was sadly lacking.

Again using the damning language of the investigator, the commission described the standards it found as ‘incomplete and unclear in their application’. It recommended that a single set of banking standards rules should be drawn up by regulators, to apply to both senior persons and licensed bank staff. Breaches should then lead to enforcement action by regulators.

It might be reasonable to assume the banking sector had such standards already. Regrettably, it did not. But, again, AAT can crow – because we’ve had those standards for years.

AAT’s Code of Professional Ethics: our own rules

Our equivalent to the banking standard rules is the Code of Professional Ethics, which underpins the standards we expect our members, as professional accountants, to abide by. These standards can be used as their sword and shield in ensuring they practice in a manner that will maintain public trust and confidence in their professionalism.

These are supported by the Members in Practice Regulations, for those of you working in practice, and our wider policy framework, which is applicable to you all.

Why AAT won’t rest on its laurels

The commission has provided all professions with the opportunity to conduct an audit on their own standards, and AAT’s outlook looks rosy. Yet we cannot rest on our laurels. Public trust has to be earned, and can be broken in a second by a single high-profile default, as the banking industry has found.

The commission identified no quick wins, and believes it could take well over a generation to implement a solution. By that time, AAT could – and should – be even further ahead.

If you would like more advice and guidance on ethical issues facing the profession of accounting, visit the AAT Ethics website. 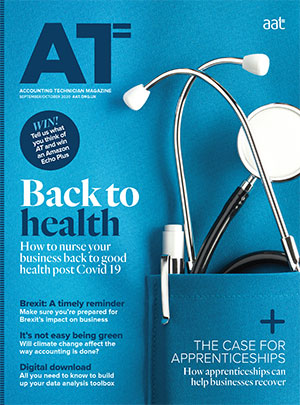